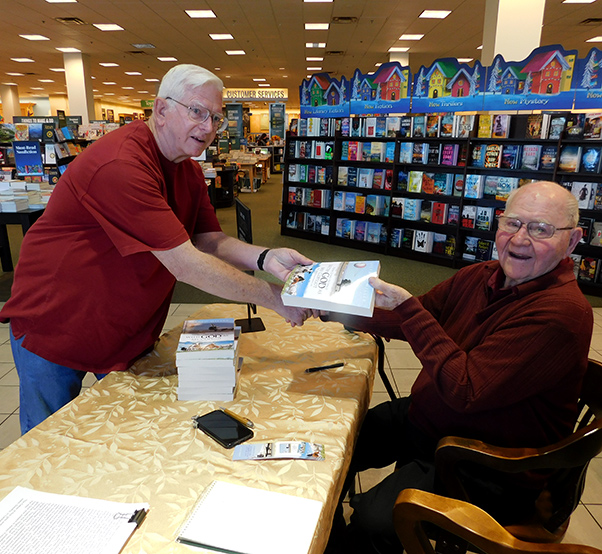 Author Alfred Miller signs a copy of his book From Cows to Space with God as my copilot for a local fan. (Photograph by Diane Betzler)

Lancaster, Calif., resident Alfred Miller is a man who’s proud of his past, not just his own past, but that of his generation of Americans who came together and worked together in support of the country they loved at a time when the country desperately needed that support.

Alfred Miller believes he has a story to tell, it’s a story about the men and women who joined together to do what they could to support America after the infamous attack on the U.S. naval base at Pearl Harbor on Dec. 7, 1941.

Miller tells his story in a book called From Cows to Space With GOD as My Copilot.

The mathematician, turned author began writing his story last year, at 88-years old, and on Nov 2, this year, Miller eagerly presented his account of the golden age of aviation at a book-signing event held at the Barnes and Noble book store in Palmdale, Calif.

His story talks about how a cow hand became interested in aviation and starts out describing his early years.

A native to the Golden State, Alfred Miller was born in Wasco, Calif., in 1930, and was raised on the family dairy farm along with seven siblings. 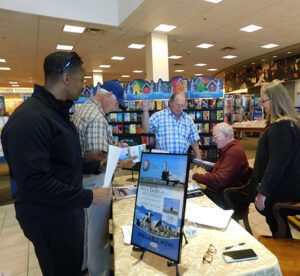 His family farm was located in Central California, near Minter Field, which was a United States Army flight training center at the time.

By his teenage years World War II broke out and the Army Air Corps cadets started flying their training flights over the Miller’s farm.

“The pilots used the farm’s silo as a reference point, I could see their faces as they flew over the farm,” Miller told folks during his book signing event.

Miller says he used to watch the training flights in awe and said that’s when he fell in love with airplanes.

“That’s when I knew I didn’t want to milk cows for the rest of my life,” he said. So, immediately after graduating from high school Alfred Miller entered his college years at the University of California at Berkeley where he earned a Bachelor of Science Degree in Mathematics.

Armed with his degree, Miller embarked upon what he describes as an adventurous career working at the prestigious Air Force Flight Test Center at Edwards Air Force Base in Southern California’s High Desert.

“I was assigned to support a very high priority program, the prototype YF-100A Super Sabre, he tells folks with pride.

Miller says he had a “front-row seat and a bird’s-eye view” of flight testing and had the privilege of supporting a variety of test programs.

He says he was also heavily involved in the first recovery of the space shuttle landing. 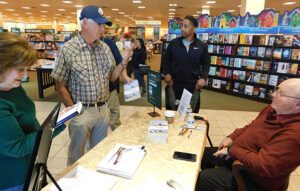 A man of strong faith, Alfred Miller gives God credit for his successful career and says God was his copilot throughout his career.

His reason for writing From Cows to Space With GOD as my Copilot is twofold. During his entire career every project Miller worked on was classified and therefore he was not able to talk about his work or share anything about what he did at Edwards with anyone. “My family didn’t even know what I did for a living,” he said.

The other is the fact that the world had become familiar the country’s top fighter and bomber pilots, but knew nothing about the team behind the scenes.

Miller tells it all in From Cows to Space with GOD as My Copilot and says his book is the story of the men and women behind the scenes that made the “Right Stuff” possible.

“Mine is the story about who was behind the scenes to enable our heroes to do the right stuff,” Miller said about his book.

From Cows to Space with God as My Copilot is being sold at the Palmdale Barnes and Noble book store for as long as copies last.